Fred Rogers (1928–2003) was an enormously influential figure in the history of television. As the creator and star of Mister Rogers’ Neighborhood, he was a champion of compassion, equality, and kindness, fiercely devoted to children and taking their questions about the world seriously. The Good Neighbor is the first full-length biography of Fred Rogers. 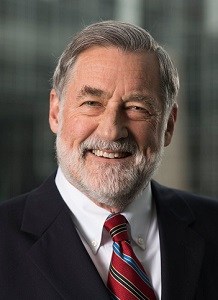 Maxwell King's four-decade career includes the presidencies of two of the country’s largest philanthropies and the editorship of one of its most influential daily newspapers.

King joined The Pittsburgh Foundation, with assets of more than $1 billion, in 2014 as president and CEO…King expanded the Foundation’s investment in its Center for Philanthropy, which combines the charitable passions of donors with expert program staff and grantees to improve lives in the Pittsburgh region.

Before that, King served for two years as director of the Fred Rogers Center for Early Learning and Children's Media at Saint Vincent College in Latrobe, Westmoreland County.

As president of the Pittsburgh-based Heinz Endowments from 1999 to 2008, he led the disbursement of about $500 million in grants to projects, organizations, and initiatives primarily in western Pennsylvania.

From 1990 to 1998, King was editor of the Philadelphia Inquirer. During that period, the Inquirer was recognized by Time magazine as one of the five best newspapers in America.

King has served on boards and committees for many national and regional organizations, including the national Council on Foundations, which he led as the first chair of its Ethics and Practices Committee and then as chair of the full board from 2006 to 2008. - The Pittsburgh Foundation

Sometimes, learning too much about a person can make his magic disappear. But in King's nearly 400-page biography of Fred Rogers, which thoroughly details everything from a bullied childhood (classmates called him Fat Freddy) to reflections on the psychological power of puppetry, the inimitable Mr. Rogers becomes somehow even more enchanting. In addition to elegantly narrating the facts of Rogers' life: a wealthy upbringing, his spiritual conviction and love of music, a lifelong commitment to early childhood education, commercial support paired with refusal to commercialize his namesake show, King's book brims with anecdotes of intimate exchanges that highlight Rogers' kindness and grace. Hours spent at the airport with a friend whose plane was delayed. A brief, calming conversation in an elevator with a television producer frantic over studio hiccups. A casual stroll with a little boy shocked to see his television idol on his very own block. Deep and simple, that's what matters, Rogers used to say. King, Pittsburgh Foundation president and a former newspaper editor, counsels that, in our current political climate, we would do well to remember this credo today. --Maggie Taft, 2018

The creator and host of the 1968-2001 children's television show Mister Rogers' Neighborhood was a paragon of friendliness, according to this adulatory biography. King, a former Philadelphia Inquirer editor who knew Fred Rogers before his death, paints him as a genius with an uncanny rapport with children-sprouted from boyhood struggles with wealthy, smothering parents, bullies, and asthma – and a determination to alleviate their angst. Rogers became famous for his show, which blended puppets, songs, conversational lessons on everything from cleaning up messes to weathering divorce, and reassurances that kids are fine the way they are, all based on the latest child-development theories. In King's glowing portrait, Rogers, who was also a Presbyterian minister, was a protector of family values – he refused to advertise merchandise to kids – as well as an exemplar of "caring, kindness and modesty," who was dubbed "the most Christ-like human being I have ever encountered" by a fellow clergyman. Rogers has been criticized for promoting a culture of televisual passivity and coddling – he once retaped a scene in which a pot of popcorn overflowed because he thought the spillage might frighten young viewers - but King's hagiography skirts those issues. Readers looking for an incisive examination of Rogers's impact will not find one here. -- (Sept.)

This marvelous audio recording recounts the life story of the incredibly influential children's television pioneer Fred Rogers. Listeners who grew up watching Mr. Rogers' Neighborhood may be surprised to learn just how much care, thought, and research went into the various children's programs that Rogers created. His privileged upbringing did not protect him from the painful experiences of bullying and excruciating shyness. This led him to take refuge in his imagination with a series of puppets he designed. As he became a student, his interest in child psychology, family dynamics, and eventually a call to the Presbyterian ministry all combined to foster the perfect background to support this kind, devoted man in his quest to provide comfort to children. He was fierce in his determination to create a show that gave children the chance to feel and express their fears, concerns, and thoughts. He had a way of communicating at their level with love and respect that had never been seen before on television. LeVar Burton is the perfect narrator for this wholly engaging book. His lively, warm reading fully involves the listener, using quiet spaces much the way Rogers did. Burton's choice to impersonate different speakers may jar some listeners, but it works for the most part. VERDICT Burton's nuanced, lively inflection and pacing keep listeners' attention and many will come away from the production with a new personal hero in Mr. Rogers. Highly recommended for all collections. ["Grown-up fans, pop culture enthusiasts, and anyone interested in the history of educational television and child development will be inspired. An excellent and timely addition to most collections" -- LJ 8/18 starred review of the Abrams hc.]-B. Allison Gray, Goleta P.L., CA © Copyright 2018. Library Journals LLC, a wholly owned subsidiary of Media Source, Inc.

"The man who conveyed a Zen-like calm on television saw a psychiatrist for decades." So writes Pittsburgh-based nonprofit CEO King at one of many points in which he emphasizes that the beloved star of Mister Rogers' Neighborhood was a sometimes-contradictory fellow. Fred Rogers (1928-2003) was no saint, given to occasional outbursts of anger and not above a little deception in order to get out of sticky situations, as when he tried to separate himself from a company he effectively owned during a strike. Raised in the hardscrabble Rust Belt, Rogers escaped, going to work as a floor manager in the early days of TV and making a mark with the 1951 production of Amahl and the Night Visitors, "a high point in NBC's creative period." He could have followed a path to an executive role with the network, but he returned to Pittsburgh and pioneered a different kind of TV aimed at children different because, King writes, it actually respected its audience. Rogers was an emphatic and empathetic Christian who wanted to impart those values to his audience, but by the author's account, he saw the world or at least the show he built with the eyes of a child and insisted that those who worked for him do the same. As a former producer noted, whenever anyone was reading aloud onscreen, the camera showed the words and tracked from left to right to mimic the path of the eyes in reading: "All those little tiny details were really important to Fred." Though indifferently written and sometimes scattered, King's book is resolute on the turns Rogers took in order to be sure that his show not be the usual pandering, cereal-selling child's fare, passing up a fortune in the bargain. A bonus: the author's revelation of the role Rogers played in getting Monty Python on the air in America. Serviceable overall, but strong in its demonstration that Rogers was not just a good neighbor and a good friend to children, but also a very good man. -- Copyright Kirkus Reviews, used with permission. Who Was Mister Rogers?

Learn how Fred Rogers, a minister and musician from Pennsylvania, became one of America's most beloved television personalities and everyone's favorite neighbor. Even though he's best known for his successful PBS series Mister Rogers' Neighborhood , Fred Rogers never dreamed of working in television. In fact, he hated the very first program that he ever watched! Join author Diane Bailey as she takes readers through the journey that brought Mister Rogers into our living rooms. From his childhood interest in puppet-making and music, to his courageous visit to Russia during the Cold War, this book details Mister Rogers's quest for kindness and his gentle appeal to be more neighborly. I'm Proud of You: My Friendship with Fred Rogers

When journalist Madigan met Mister Fred Rogers in 1995, his personal life was in shambles. In this story reminiscent of Mitch Albom and his phenomenal bestseller Tuesdays with Morrie, the author details the relationship between a man struggling with living life and the person he calls the human embodiment of heaven. Bringing the lessons of Mister Rogers into the digital age Playful and practical, When You Wonder, You're Learning introduces a new generation of families to the lessons of Mister Rogers' Neighborhood . By exploring the science behind the iconic television program, the book reveals what Fred Rogers called the "tools for learning": skills and mindsets that scientists now consider essential. These tools--curiosity, creativity, collaboration, and more--have been shown to boost everything from academic learning to children's well-being, and they benefit kids of every background and age. They cost next to nothing to develop, and they hinge on the very things that make life worthwhile: self-acceptance; close, loving relationships; and a deep regard for one's neighbor. When You Wonder, You're Learning shows parents and educators the many ways they might follow in Rogers' footsteps, sharing his "tools for learning" with digital-age kids. With insights from thinkers, scientists, and teachers--many of whom worked with Rogers himself--the book is an essential exploration into how kids and their parents can excel at what Rogers taught best: being human.