In this moving debut novel, two estranged siblings must set aside their differences to deal with their mother's death and her hidden past—a journey of discovery that takes them from the Caribbean to London to California and ends with her famous black cake.

In present-day California, Eleanor Bennett's death leaves behind a puzzling inheritance for her two children, Byron and Benny: a traditional Caribbean black cake, made from a family recipe with a long history, and a voice recording. In her message, Eleanor shares a tumultuous story about a headstrong young swimmer who escapes her island home under suspicion of murder. The heartbreaking tale Eleanor unfolds, the secrets she still holds back, and the mystery of a long-lost child, challenge everything the siblings thought they knew about their lineage, and themselves.

Can Byron and Benny reclaim their once-close relationship, piece together Eleanor's true history, and fulfill her final request to "share the black cake when the time is right"? Will their mother's revelations bring them back together or leave them feeling more lost than ever?

Charmaine Wilkerson's debut novel is a story of how the inheritance of betrayals, secrets, memories, and even names, can shape relationships and history. Deeply evocative and beautifully written, Black Cake is an extraordinary journey through the life of a family changed forever by the choices of its matriarch. 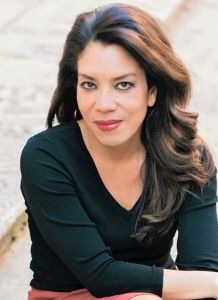 Charmaine Wilkerson is from New York, has lived in Jamaica, and does much of her writing in Italy. A former news and communication professional, she has published award-winning stories in various anthologies and magazines. Her debut novel Black Cake is a New York Times bestseller and a #ReadWithJenna book club pick. A screen series based on the novel is currently under development for Hulu. Charmaine is represented by Madeleine Milburn at the Madeleine Milburn Literary Agency.  - Author's website

In her beautifully poignant debut novel, Wilkerson explores how secrets kept and stories left untold can "matter even more than the things we do say." Eleanor Bennet's final bequest, an audio recording and a homemade Caribbean black cake stowed in the freezer, puzzles her grieving children, Benny and Byron. The story that emerges upends everything the estranged brother and sister thought they knew about their family and themselves. In 1965, a young woman fleeing an arranged marriage and suspicion of murder disappears into the surf. Cutting all ties, she crosses oceans, reinvents herself, and makes heartbreaking choices to take control of her life and, she hopes, reunite with her first love. Wilkerson uses one Caribbean American family's extraordinary tale to probe universal issues of identity and how the lives we live and the choices we make leave "a trail of potential consequences" that pass down through generations. She is a masterful storyteller. Black Cake's complex plot unfolds in vignettes that alternate among different times, places, and viewpoints, evoking her children's bewilderment as they absorb Eleanor's account. Memorable, fully developed characters ground a story that spans decades and continents. Vivid symbolism and imagery enhance the narrative's "fable-like" tone, as when Byron imagines her mother's black cake recipe as an "incantation calling up a line from her true past."HIGH DEMAND BACKSTORY: Advance raves and the news that a Hulu series is in development with Oprah Winfrey will stoke interest in Wilkerson's assured first novel.

Wilkerson debuts with a shining family saga that stretches from the 1960s Caribbean to present-day Southern California. After septuagenarian Eleanor Bennett dies, her lawyer plays a lengthy message she has recorded for her children Byron and Benny. The siblings have made for uneasy company with each other since a rift grew between them--Byron, the oldest, is laser-focused on his career, while his sister Benny is drifting. They knew their mother as a stern presence and an accomplished swimmer from somewhere in the Caribbean (who was also known to bake a rum and port soaked "black cake" from an old family recipe), but neither is prepared for what they learn from the recording. Eleanor is in fact Coventina "Covey" Lyncook, who was married off to a gangster named Little Man in 1965 by her debt-ridden father. At the wedding, Little Man drops dead, poisoned. Covey runs from the scene and, knowing she will be suspected of murder, swims away from the island. At first shocked by the revelations, Byron and Benny reconcile, and their mother's instructions to share a black cake she'd left in the freezer "when the time is right" take on great poignancy. Wilkerson offers superb descriptions of Covey's homeland, from the tension between those who speak patois and those who believe in the superiority of standard English, to sensual descriptions of food, surfing, and coastal terrain. Readers will adore this highly accomplished effort from a talented new writer. Agent: Madeleine Milburn, Madeleine Milburn Literary. (Feb.)

DEBUT Wilkerson's debut brings together two estranged siblings after the death of their mother, Eleanor. Byron, a successful biologist, has stuck by his family through his father's and now his mother's deaths. After 10 years apart, he sees his sister Benny at the reading of their mother's will. The siblings, who used to be inseparable, are instructed to listen to a recording their mother left, then share the black cake (her old family recipe for special occasions) "when the time is right." The recording reveals a hidden past filled with tragedy and heartache neither child could have imagined. The siblings learn about Covey, who lives in the Caribbean, is abandoned by her mother at an early age, and falls for a boy named Gibbs. When Covey is accused of murder, she leaves home with only a wooden box and her mother's black cake recipe. The story moves to Britain, where Covey experiences more 4 tragedy. Byron and Benny learn the sacrifices, hardships, and sorrow their mother endured, while finding out more about themselves and their identities. VERDICT Already picked up by Oprah's Harpo Films, Wilkerson's novel jumps between Covey's life and Byron's and Benny's in the current day. This engrossing read is highly recommended.-- Brooke Bolton

Siblings called together after their mother's death learn that almost everything they know about their Caribbean-born parents is a lie. On an unnamed island in 1965, a bride throws herself into the ocean after her much older gangster husband drops dead at their wedding reception and is never again seen in her village. (She is, however, a very good swimmer.) In Southern California in 2018, Byron and his sister, Benny, are called to listen to an audio file their mother spent days making for them. Estranged for years, they resist, asking for a copy to take home, but their mother's lawyer (who also seems to be grieving) says their mother was very specific, telling them, "There are things your mother wanted you to hear right away, things you need to know." Are there ever. The threads connecting the alternating sections of the book, "Then" and "Now," are many, and tangled, and somehow just keep getting more complicated as the pages roll by. The complex plotting of this novel, unfurling over decades and continents, and the careful pacing of its reveals, often in very short, almost epigrammatic chapters, are enticing. But the pacing is overly slowed by endless lingering inside the heads of characters recapping, reviewing, and agonizing over their predicaments. You want to be tapping your toe with suspense, not fraying patience. And while the island-born characters introduced in the "Then" part of the book are deliciously larger than life, with outsized talents, shortcomings, and powers of self-reinvention, the backstories and concerns of the "Now" characters feel consciously assembled to touch bases of gender and racial identity, domestic abuse, political consciousness, climate change, etc. Nonetheless, Wilkerson is clearly an author to watch. There is plenty to savor in this ambitious and accomplished debut. Copyright (c) Kirkus Reviews, used with permission.

The Vignes twin sisters will always be identical. But after growing up together in a small,southern black community and running away at age sixteen, it's not just the shape of their daily lives that is different as adults, it's everything: their families, their communities, their racial identities. Many years later, one sister lives with her black daughter in the same southern town she once tried to escape. The other secretly passes for white, and her white husband knows nothing of her past. Still, even separated by so many miles and just as many lies, the fates of the twins remain intertwined. What will happen to the next generation, when their own daughters' storylines intersect? Weaving together multiple strands and generations of this family, from the Deep South to California, from the 1950s to the 1990s, Brit Bennett produces a story that is at once a riveting, emotional family story and a brilliant exploration of the American history of passing 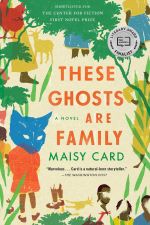 These Ghosts Are Family

PEN/Hemingway Award For Debut Novel Finalist Shortlisted for the 2020 Center for Fiction First Novel Prize A "rich, ambitious debut novel" ( T he New York Times Book Review ) that reveals the ways in which a Jamaican family forms and fractures over generations, in the tradition of Homegoing by Yaa Gyasi. Stanford Solomon's shocking, thirty-year-old secret is about to change the lives of everyone around him. Stanford has done something no one could ever imagine. He is a man who faked his own death and stole the identity of his best friend. Stanford Solomon is actually Abel Paisley. And now, nearing the end of his life, Stanford is about to meet his firstborn daughter, Irene Paisley, a home health aide who has unwittingly shown up for her first day of work to tend to the father she thought was dead. 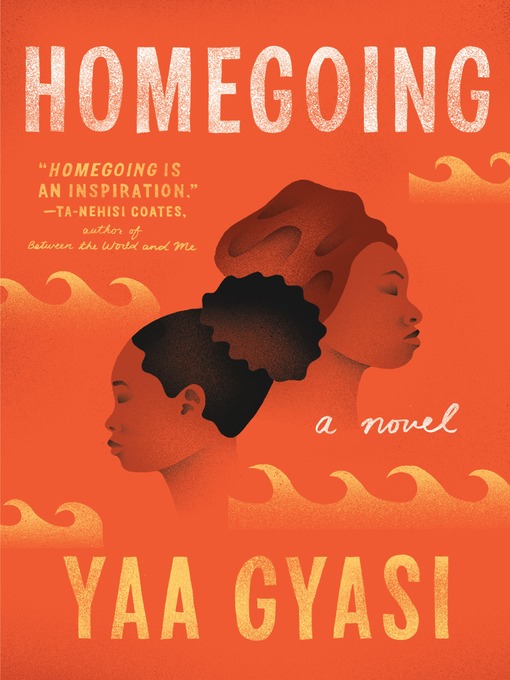 Ta-Nehisi Coates The unforgettable New York Times best seller begins with the story of two half-sisters, separated by forces beyond their control: one sold into slavery, the other married to a British slaver. Written with tremendous sweep and power, Homegoing traces the generations of family who follow, as their destinies lead them through two continents and three hundred years of history, each life indelibly drawn, as the legacy of slavery is fully revealed in light of the present day. Effia and Esi are born into different villages in eighteenth-century Ghana. Effia is married off to an Englishman and lives in comfort in the palatial rooms of Cape Coast Castle. Unbeknownst to Effia, her sister, Esi, is imprisoned beneath her in the castle's dungeons, sold with thousands of others into the Gold Coast's booming slave trade, and shipped off to America, where her children and grandchildren will be raised in slavery. One thread of Homegoing follows Effia's descendants through centuries of warfare in Ghana, as the Fante and Asante nations wrestle with the slave trade and British colonization. The other thread follows Esi and her children into America.